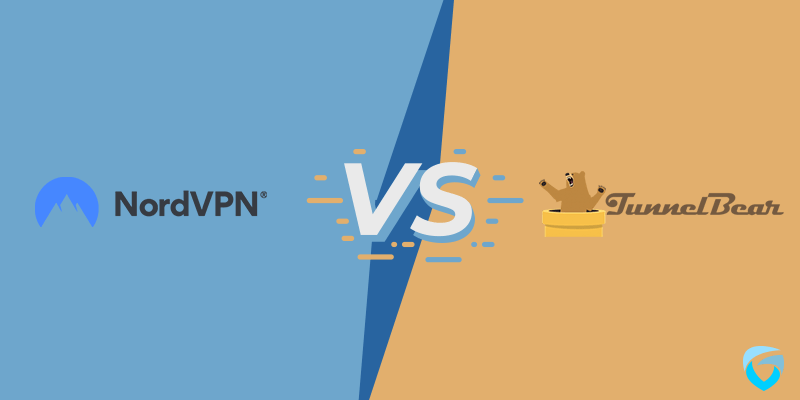 Are you looking for a TunnelBear vs NordVPN comparison? Then you have come to the right place. We have compared two major VPN providers to find out which is better in 2020. Also, we compared major features, internet speed, and unblocking abilities.

We know how hard it is to choose from a long list of VPNs. With every VPN provider offering top security features and cheap plans, we have shared our trait-by-trait analysis of TunnelBear and NordVPN.

NordVPN is the winner because:

Can TunnelBear compete with NordVPN? The answer is yes. But NordVPN is a top-rated VPN provider because it can unblock popular streaming websites such as Netflix, Hulu, HBO, and even BBC iPlayer. Whereas TunnelBear does not provide access to any streaming channels and they don’t even claim to offer access. Furthermore, NordVPN offers more than 5000 servers that are best for streaming and torrenting anonymously. And TunnelBear hasn’t shared any information about their exact number of servers but they provide more than 1000 servers (in our educated guess). So when it comes to servers, NordVPN crushes TunnelBear.

Also, TunnelBear is not even competing with NordVPN in terms of torrenting. TunnelBear has its jurisdiction in Canada which started restricting torrent downloads. Whereas, NordVPN is in Panama that is safe from data retention laws as well as offers P2P servers. This is the reason why NordVPN is best-suited for downloading torrents and staying anonymous.

Both TunnelBear and NordVPN have a minimal user interface with easy navigation. TunnelBear is best at using a few gimmicky features and bear puns to entice first-time VPN users. But TunnelBear is not the first choice for advanced VPN users because of its limited security options. NordVPN has a similar map-based user interface like TunnelBear. So you can either find a server from the drop-down menu or find one on the map.

So without any further ado, let’s discuss the pricing plans first.

TunnelBear does not offer any long-term pricing plans and you have to subscribe to their monthly deals which are as low as $4.99. And the best part about using TunnelBear is that you can enjoy a free plan of 500 MB before locking into a long-term deal. Also, you can get 1 GB free if you send a tweet about TunnelBear.

Whereas NordVPN do not have a free trial but do provide a 30-day money-back guarantee. And NordVPN is pushing new users to choose their 3-year VPN plan by slashing the price to $3.49 per month. Although, NordVPN’s deals are enticing but picking a 3-year plan can be farfetched. 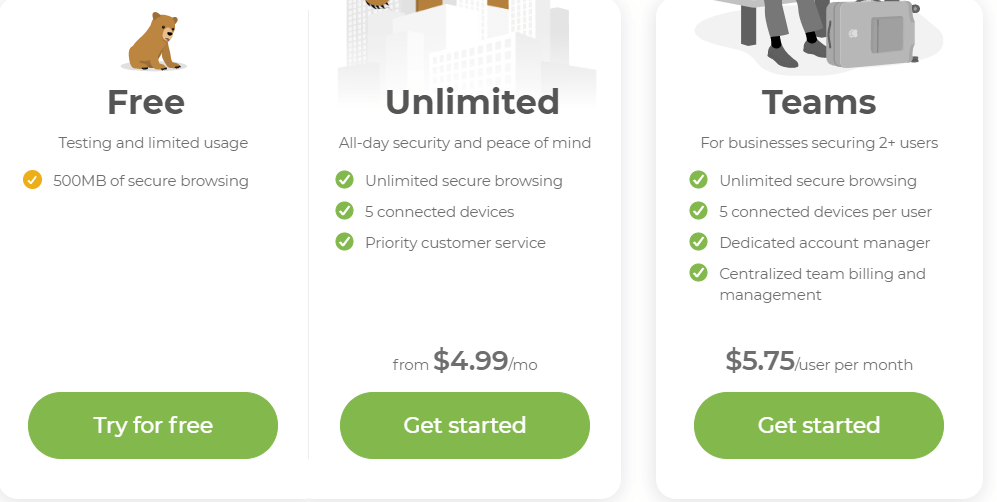 Both TunnelBear and NordVPN have similar pricing plans. But which one of them has a better payment policy?

Both TunnelBear and NordVPN have locked horns when it comes to providing payment methods. As NordVPN offers a 30-day money-back guarantee, it is better to use a credit card to subscribe to a monthly deal in case you want a refund.

TunnelBear offers a free 500 MB plan as well as an extra 1 GB so you can check whether you want to lock into a long-term deal or not. The bottom line is you can even use Bitcoin to subscribe to either TunnelBear or NordVPN’s deals.

When it comes to refund policies, both TunnelBear and NordVPN are reliable. But TunnelBear is a step ahead of NordVPN’s subscription plans because it offers 500 MB free to all new users. This means you can use TunnelBear before sharing your credit card information.

Word of Advice: You might face trouble in getting a refund if you are using Bitcoin as your payment option. So it is better to use a credit card instead to create a TunnelBear or NordVPN account.

Is NordVPN better than TunnelBear in terms of features? The answer is yes. Although TunnelBear and NordVPN offer similar features, the real comparison boils down to some features that are important for VPN users. Some of them include a split tunneling feature, multi-platform support, and DNS leak prevention.

TunnelBear, however, uses military-grade encryption (AES-256) as well as a split tunneling feature to protect IP addresses. This means your identity is hidden from cyberattackers and internet security providers. Even with these security protocols, TunnelBear does not support torrent downloads whereas NordVPN does.

Moreover, both TunnelBear and NordVPN offer multi-platform support so you can use either of them on any device. And with the help of an internet kill switch option, you can stay hidden whether you are using TunnelBear or NordVPN.

Now let’s discuss logging policies. Both TunnelBear and NordVPN claim that they don’t store user logs. But these VPN providers might store timestamps. And TunnelBear has its jurisdiction in Canada which is a part of the Five Eyes Intelligence partnership, and they might keep track of server connections and the devices that you are using.

NordVPN, however, does not store any user logs but they might collect billing information, timestamps, and server connections during the free trial.

The bottom line is NordVPN is far better than TunnelBear for advanced VPN users.

Sadly TunnelBear cannot unblock geo-restricted channels. We asked their support representatives about Netflix and Hulu unblocking and they responded by saying this, “If you are looking strictly to access geo-restricted content, however, our Bears may not be the right choice for you.”

The above response proves than NordVPN has pushed TunnelBear down the list of top VPN providers by offering access to geo-restricted websites. As NordVPN offers complete access to Netflix, Hulu, ABC, NBC, and heavily restricted BBC iPlayer, it should be your first choice for unblocking streaming channels.

Simply put, TunnelBear is not used for streaming region-specific websites and you must consider NordVPN or any other VPN provider for unblocking channels. In our NordVPN vs TunnelBear comparison, the latter is losing its grip very quickly.

After Canada starting banning torrent downloads, there are no chances that TunnelBear supports torrenting. But there are a few TunnelBear users that may still download torrents anonymously according to our research.

FYI: If you are caught downloading torrents then you have to pay a fine or serve prison time too. Because torrenting is illegal in many countries.

But does NordVPN allow torrenting? The answer is yes. You can choose NordVPN as it offers P2P servers and supports torrent downloads trouble-free. Furthermore, NordVPN offers high internet speed and a split tunneling feature so you can speed up torrent downloads.

However, you need to connect to torrent-optimized servers on NordVPN to remain anonymous while torrenting pirated content.

TunnelBear: Not recommended for torrenting.

As we have discussed previously, TunnelBear cannot unblock Netflix libraries even though it has jurisdiction in Canada. TunnelBear is a privacy-friendly VPN and does not unblock geo-restricted websites at all. Whereas NordVPN is a juggernaut VPN provider that offers all access to geo-blocked websites like Netflix, as well as Hulu, HBO, or BBC iPlayer.

After China’s Great Firewall, there are only a few VPN providers than can bypass heavy restrictions. And both NordVPN and TunnelBear can go around VPN blocks in China. But which one of them is better for unblocking websites in China? There is no straight answer to this question.

China uses DPI (Deep Packet Inspection) to keep track of every individual and can even check their online communication. This is the reason why you need a tough VPN to bypass China’s Great Firewall. But both NordVPN and TunnelBear uses a security feature to combat these heavy restrictions.

TunnelBear uses Obfsproxy (they called it Ghostbear) to re-route internet traffic in China and mask your identity. In this way, you can turn on Ghostbear feature on TunnelBear and remain hidden from Chinese government.

NordVPN uses obfuscated servers and tunneling protocols like OpenVPN to bypass VPN blocks in China. And NordVPN is one of a few VPN providers that unblock popular websites in China. As NordVPN doesn’t have any servers in China, they don’t have to follow data retention laws.

TunnelBear has added a few bear-filled puns on the main user interface to entice users. And it also has a drop-down server menu for ease. TunnelBear’s interface is similar on many devices whether you are using an IOS, Windows laptop, or chrome extension. When you connect a server on Tunnelbear the whole map turns green.

NordVPN also has a map-based menu, like TunnelBear, and a drop down menu to choose from a range of available servers. But NordVPN offers more options for users to customize security protocols on the primary user interface. Also, NordVPN has a few other options which include CyberSec to block ads and an Add to Siri button as well. 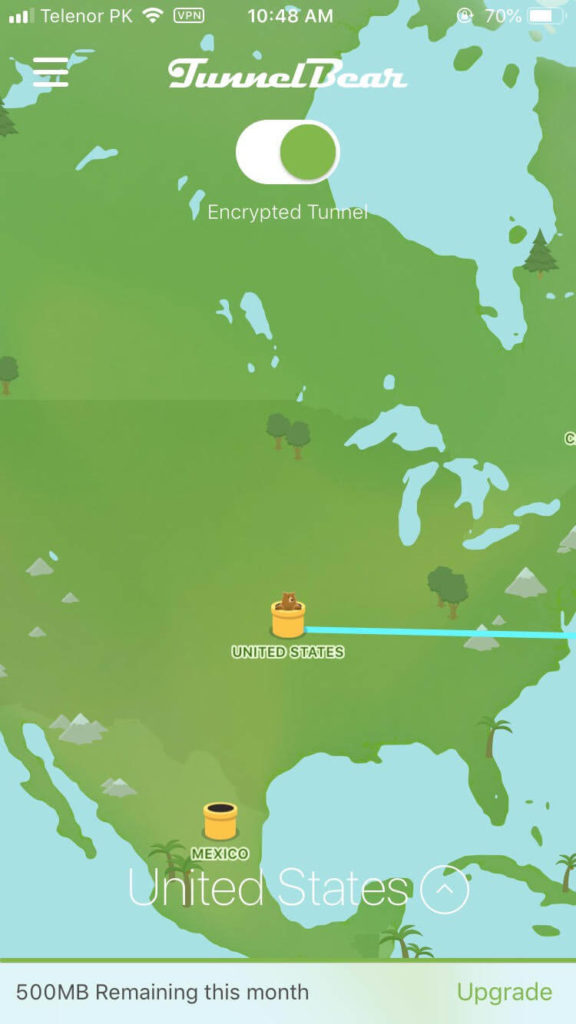 NordVPN provides more servers and access in countries than TunnelBear. This means NordVPN offers greater internet speed and server connections instead of TunnelBear.

TunnelBear, however, provides all options to its users even if they are using a free 500 MB plan. But it might lead to poor quality of server connections for paid TunnelBear users. 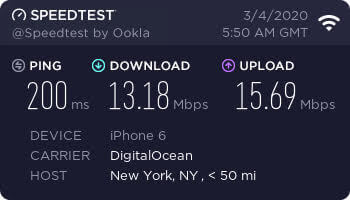 NordVPN is a great VPN provider because it has jurisdiction in Panama so it is safe from data retention laws. But both NordVPN and TunnelBear use OpenVPN and IPSec encryption protocols as well as AES-256 (which is considered uncrackable).

With the help of the AES-256 encryption protocol, you can remain hidden from prying eyes and protect IP-related leaks. Also, both NordVPN and TunnelBear use Obfsproxy to hide your VPN identity and re-route your internet traffic.

Moreover, both TunnelBear and NordVPN have personal DNS servers which are important to remain hidden from internet service providers and cyberattackers. These VPN providers also offer an internet kill switch option.

As part of the Five Eyes Intelligence Partnership, TunnelBear might share user data if requested by other countries, which include Australia, New Zealand, USA, and UK. Whereas NordVPN is in Panama and claims to store zero logs of their users. But NordVPN keeps track of timestamps and server connections.

NordVPN has a better customer support system as they allow users to get in touch through their live chat features. We asked a question on NordVPN’s live chat and they replied within seconds. Whereas TunnelBear does not offer live chat support and you have to send an email request instead.But TunnelBear takes a few hours to respond to your queries even if you are asking a simple and straightforward question. TunnelBear does offer detailed knowledge base to help users instantly. Customers ask too many questions so an automated response from them is accepted.TunnelBear: Customer Support

Final ThoughtsSo in our TunnelBear vs NordVPN comparison, NordVPN is a clear winner.Even though TunnelBear has free and affordable monthly plans, it does not perform well in unblocking Netflix and other geo-restricted channels. TunnelBear has a simple user interface and uses privacy-friendly features, but it lacks behind NordVPN.As NordVPN offers access in China and unblocks geo-restricted channels like Netflix and BBC iPlayer, it is a must-have VPN for regular streamers. Although NordVPN offers a discount on a 3-year plan only, it provides high-end security protocols, high internet speed, and P2P servers.