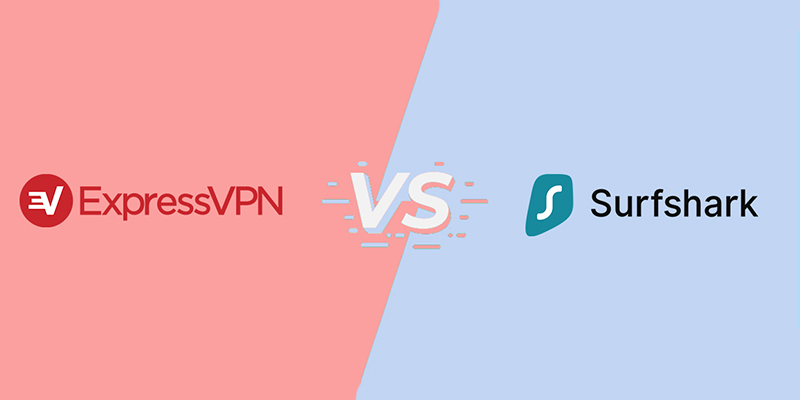 Choosing a VPN for your use is a difficult task since the industry is getting competitive. Before buying a VPN, you have to look at all their features in detail to make a decision. Thus, to help you out, we have tested and analyzed ExpressVPN vs Surfshark to help you decide which one is the best.

So without further ado, let’s get down to the face-off between ExpressVPN vs Surfshark.

ExpressVPN vs Surfshark: The Real Showdown

The winner is Surfshark and that’s because of:

Here is a quick summary if you are stuck between ExpressVPN and Surfshark!

It is natural to consider the price of anything before making a purchase. While you will see various prices for the numerous VPNs out there, it is important to realize you do not want to factor in price alone. You may save money initially, but you will soon discover a certain service may not come with all the features you need.

ExpressVPN comes with a 30-day money-back guarantee. Surfshark has the exact same period. You can pay for either VPN with numerous different payment processors. Whether you want to pay with your credit card, PayPal or some other cryptocurrency, you can pay however you are most comfortable.

You should pay attention because both VPN services offer discounts occasionally. You may be able to save some money depending on what time of year you decide to sign up.

For example, ExpressVPN has been known to offer three months of use completely free of charge where you can cancel at any time. Either way, you have a month to figure out whether you enjoy the service before deciding to sign up in earnest.

There are numerous factors that can affect the overall speed and performance of your VPN. However, by and large, ExpressVPN tends to always come out on top. It comes with first-class speed, and in many cases, you will not even have to worry about 4K media streaming.

Surfshark is still plenty fast. You may experience some throttling when you try to access some more remote servers. It is a perfectly fine VPN, but it just does not come close to what you get with ExpressVPN. If speed is the most important factor to you, then ExpressVPN is the clear winner.

The whole point of signing up for a VPN is that you have security as you browse sites from all over the globe. ExpressVPN utilizes AES-256 encryption, which relies on a massive host of protocols. It is up to you to decide whether you want PPTP, L2TP/IPsec or OpenVPN.

With this service, you also enjoy the benefits of having a kill switch handy in case you ever become disconnected to the server. The kill switch will automatically log you off, so your data is secure.

Neither VPN maintains a log of your activity. That means if the servers ever become compromised, there is no record of how you have been using the VPN. This means Surfshark is just as trustworthy as ExpressVPN. It also uses AES-256 with IKEv2 and OpenVPN as your security options. It has never had any data leaks, so you can honestly trust either VPN with your secure information.

ExpressVPN has over 3,000 server spots located around Earth. These servers are located in more than 160 locations in over 90 countries. That means you can generally find a server close to where you want internet access with reliable performance.

Surfshark has a decent number of servers but not as many as ExpressVPN. Surfshark currently has roughly 1,000 servers in about 60 countries. ExpressVPN has one of the highest quantities of servers out of any service out there, so it easily takes the win in this category.

Many people want a VPN so that they can access streaming sites from other countries. No matter where you live, you can still manage to watch Netflix, Amazon Prime, Hulu, BBC iPlayer and various other sites with ease. Fortunately, you can watch all of these services and plenty of others with either ExpressVPN or Surfshark VPN.

The best part is that they both come with P2P-friendly file sharing. That means you will be able to stream content relatively quickly with minimal lagging. Neither one has a clear edge here, so for all of the streamers out there, either one would be a good choice.

Both VPNs have their unique features. ExpressVPN has numerous high-end features, including strong data protection, split-tunneling and many others. It is also prudent to point out that ExpressVPN is known for constantly investing in its protocols to offers its customers the best features possible, such as TrustedServer, which gets rid of the need to have hard drivers from the data centers.

Surfshark remains competitive with a vast array of great features, too. It comes with CleanWeb, which is a tool capable of blocking malware, trackers and ads. It also allows you to route your online traffic through multiple servers simultaneously, further increasing your data protection exponentially. Both services have their benefits with Surfshark slightly edging out the competition with some really great innovations.

Who Is the Winner?

Both services have their pros and cons, but for the most part, Surfshark wins out over ExpressVPN when you look at each service as a whole. If you would like more information before signing up for a VPN, then make sure to head over to Top VPN Comparison to learn more.